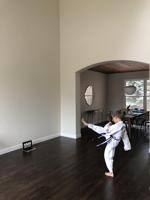 CTI has around 50 videos and building for our students to train at home during these trying times.  We are also putting on some videos that were just for our CTI Black Belt Club Members in the past.

Do the classes over and over, just like in class.  Repetition is always the key in our Moo Sul Kwan martial arts.  How many times can you do each appropriate class?  Always log-in your workout to get credit!

Keep going back to our CTI Remote page to see updates and new videos that are added into our CTI Video Lab Library. 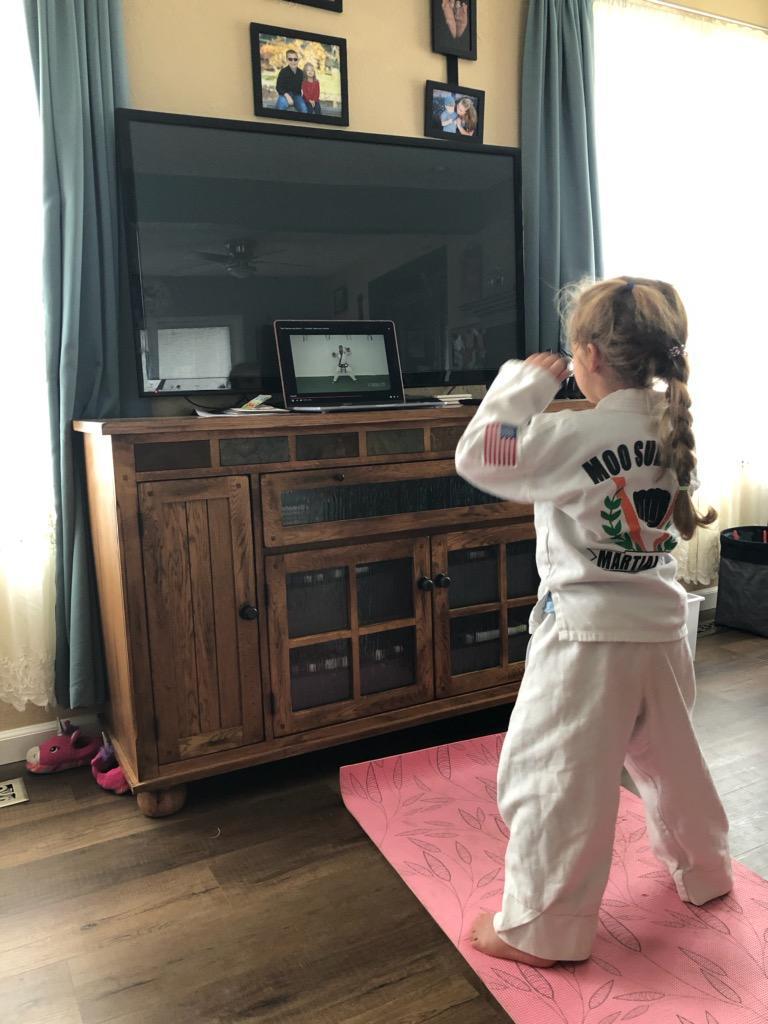 Lily Lloyd practicing at home with our CTI Remote Classes!

Our 46th CTI Superbowl was fantastic!  356 record setting participants made the two day end of the CTI-Year event an incredible experience. 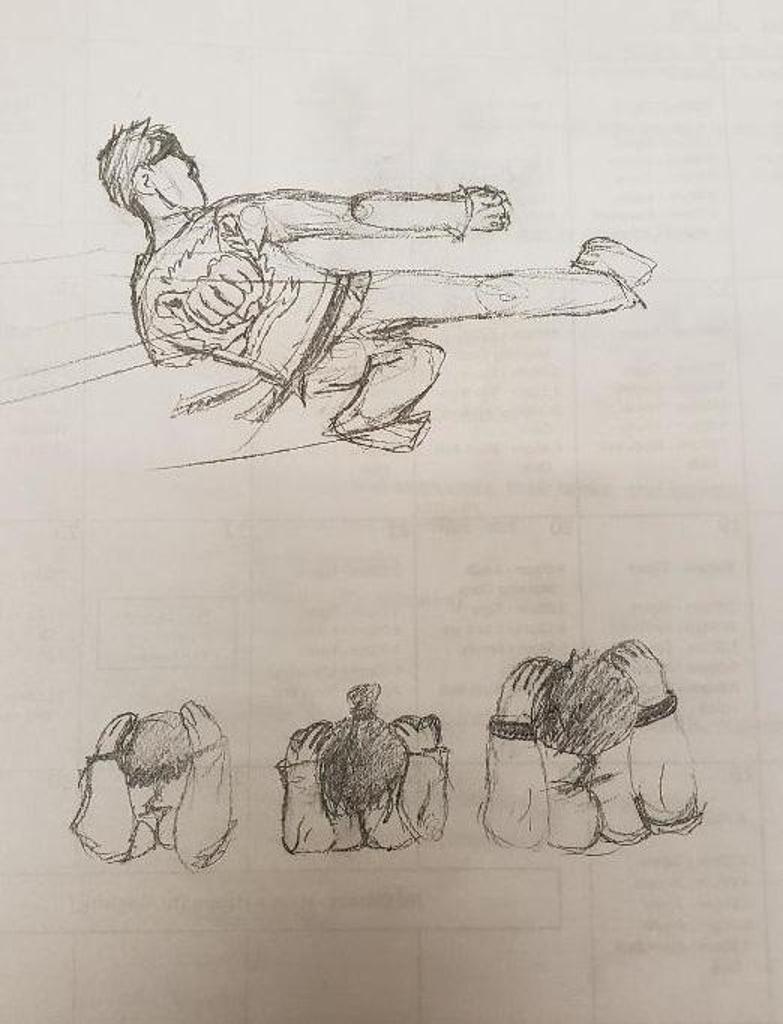 Sports are an amazing thing to do, there are games to go to, practices to attend, so on and so on.  But MSK Taekwondo isn't a normal sport, it’s a unique sport.  The Colorado Taekwondo Institute allows all ages to attend their classes, making it a sport for everyone.  The amount of exercise and perseverance helps our adults, and the amount of respect and learning aspects help our young ones.  Not only does Moo Sul Kwan Taekwondo help adults and children, but it helps teenagers.

Being a teenager can be hard, especially when school work is an issue.  With the switching of schools, the amounts of homework, the limited amount of free time, etc., teenagers have a really hard time getting that stress out and focusing on something else.  That is why MSK Taekwondo at our CTI is such an amazing thing to do.

By exercising and being physically active, teenagers can reduce the risk of mental health issues.  Stress is one of the most common issues that teenagers have, especially with school or even stress from home.  When these teens go to class, they get to leave the stress somewhere else and get to have a couple of hours to work hard and learn new techniques.  Getting to class and getting a good sweat on is amazing for teens, and thanks to MSK Taekwondo, teenagers get the opportunity to do that.

There is an idiom that has been around for some time. “Practice Makes Perfect”. This statement is partially correct. Perfect practice makes perfect. Time spent practicing the wrong way only results in knowing how to do something incorrectly. This might be a valuable lesson when experimenting, but in martial arts it is detrimental to your development and techniques. Through consistent perfect practice, a student can gain confidence and efficiency.

Muscle memory is one of the greatest benefits of practice. When the technique is needed in sparring or the actual situation, it is more likely to happen without thought and correctly if it has been perfectly practiced. Knowing what moves, stances, and position in a poomse become second nature. The student is able to concentrate on fine tuning their technique vs trying to memorize the moves. In sparring you are more likely to see attacks coming and react without dedicated though vs freezing when your opponent attacks. The same can be said for the actual situation, if that ever occurs.

Perfect practice takes dedicated focus. Erik Erickson in his theory on psychological development of human beings proposes that we can’t excel & master a skill when distraction is present. Multitasking is not an option if you want to master a skill. Dedicated practice of Taekwondo is needed in order to hone techniques into proper form. If you are distracted during practice, it is more likely that you will make a mistake or miss a small detail.

The additional practice outside of class builds confidence in moves and Poomse. The confidence is only gained through consistency. Inconsistent practice can be beneficial, but more time is probably spent recalling what is “perfect” than expanding on the last practice and making the moves or poomse better. This is really true for any skill. For that reason, start slow - Hit each move, stance, eyes, Chamber hand - Every time. The next time you practice it will be easier and you will notice new areas that need improvement.

One of my favorite things about practicing outside the class is the dynamic nature through practice in different environments. Practicing in different areas, conditions and directions brings new challenges that would not normally be there in a classroom setting. You will also find that you practice more than you normally would. Through all of this efficiency is gain along with confidence and a desire to do more and go further. Finally, you must have instruction in order to know if you are doing it correctly.

The Emperor's Seed - A Story About Integrity

There was once an Emperor from China who had no children and needed to choose a successor.  Thousands of children from across the kingdom came to the palace and were surprised when the Emperor exclaimed that he was going to choose one of them.  He gave them all a seed.  They were to go home to their villages, plant the seed in a pot and tend it for a year.  When they return in a year, the Emperor would judge their efforts and choose his successor.

There was a boy named Ling who received his seed and returned to his village.  His mother helped him to choose a pot and put some soil into it.  Ling watered his pot every day.  Once a week, the children of the village would get together to compare their plants.  After a few weeks, there were signs of life in all but Ling’s pot.

The weeks passed and Ling continued to water his pot every day.   After a few months, the pots really came to life.  Some had trees starting to grow, some had flowers and some had leafy shrubs.  Poor old Ling still had nothing growing in his pot, leading the other children to make fun of him.  Ling continued to water his pot every day.  A year passed and it was time to return to the palace to show what had grown and decide on the new heir.

Ling was anxious as his pot still showed no signs of life.  “What if they punish me?  They won’t know that I’ve watered it every day, they’ll think that I’m lazy.”  His mother looked him in the eye and explained that whatever the consequences were, he had to return and show the Emperor his barren pot.  Ling and the other children entered the palace gates.  By now, some of the plants were looking magnificent and the children were wondering which one the Emperor would choose.  Ling was embarrassed as other children looked at his lifeless pot and scoffed.   The Emperor came out and started to make his way through the crowd, looking at the many impressive trees, shrubs and flowers that were on display.  The boys all puffed their chests out and tried to look as regal as possible, hoping that they would be chosen as the heir to the empire.

Then the Emperor came to Ling.  He looked at the pot then he looked at Ling.   “What happened here?”  He asked.  “I watered the pot every day, but nothing ever grew.”  Ling muttered nervously.  Then he grumbled something to himself and moved on.

After a few hours, the Emperor finally finished his assessment.  He stood in front of the children and congratulated them on their efforts.  “Clearly, some of you desperately want to be Emperor and would do anything to make that happen, but there is one boy that I would like to point out as he has come to me with nothing.  Ling, come here please.”  “Oh no,” thought Ling.  He slowly sauntered to the front of the group, holding his barren pot.

The Emperor held up the pot for all to see and the other children laughed.  Then the Emperor continued, “A year ago, I gave you all a seed.  I told you to go away, plant the seed and return with your plant.  The seeds that I gave you all were boiled until they were no longer viable and wouldn’t grow, but I see before me thousands of plants and only one barren pot.  Integrity and courage are more important values for leadership than proud displays, so Ling here will be my heir.”  I enjoyed this story because, to me, integrity is something that is within YOU as well as something someone else might see or recognize. At the end of the day, YOU know your own truth - if you have really been true to the character you portray to others, or if you have been deceptive. Sometimes it can be a difficult thing to prove to others if you have been honest, or have a high code of honor, but what really matters at the end of the day is what YOU KNOW ABOUT YOURSELF and TRY to emulate to others. Like the homework states, ethics goes beyond being honest. However, it’s also matching not only your words to reality, but your ACTIONS. What we do every day, on a consistent basis, is the proof of who we really are, at our core. I think most people try to be good, but it means so much more to have integrity. To strive to be TRUE to what is just, fair, upright and faithful not only with others, but with yourself. To me, that is the definition of Integrity.

Integrity should be used in even aspect of everyday life - it’s great when it’s in the “big” moments, like the story in the homework with the racquetball tournament, but it should be used in the LITTLE moments too. Are you being kind and honest  to others, are you being kind and honest to YOURSELF? Treating yourself with kindness and integrity is important too. We all know it should be used at work, in the schools, and when we interact with our friends, family and co-workers and community members, but it’s important to not forget to honor and be trustworthy to yourself. Are you feeding your body the way it should be fed? Are you working out to the best of your ability? Are you practicing taekwondo at home on a regular basis? Others do perceive our actions and the content of our character, but only you know the truth and your true integrity.